Representative Marion P. Carnell and Senator John W. Drummond were two larger-than-life figures who have helped shape the Democratic Party in Greenwood, SC and beyond.

Every year, the Greenwood County Democrats honor their memory with a formal dinner. Learn more about these influential government servants below.

Representative Marion P. Carnell was born to serve. In World War II, he bravely served in the Navy.

From 1957 to 2002 he co-owned Piggly Wiggly stores in Ware Shoals, his home town, and Ninety Six. He was elected to serve District 14 in the House of Representatives in 1961, where he served on many committees. He was also the Carolina Health Centers Legislative Liaison.

When he retired from the House in 2002, his colleagues passed a Concurrent Resolution honoring him for his nearly 40 years of service, saying he was “universally known, respected, and admired for his principles and conscientiousness and as a person whose ability, intelligence, and humility have served the state so well for so many years..”

He attended Lander University, whose reputation he was instrumental in helping to grow. He received honorary degrees from various universities across the state. In 1991, the library at Piedmont Technical College was dedicated to him, and in 1992, the Carnell Learning Center opened on Lander’s campus. 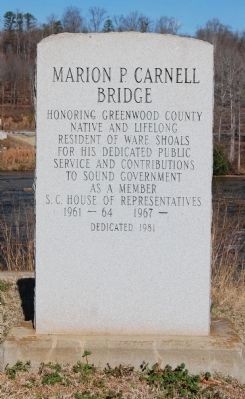 The M. P. Carnell Bridge spans stretch across the Saluda River within the three counties he served so admirably. He was committed to providing services to people with special needs and those whom society had forgotten.

The Marion Carnell Award is given to a person, who over an extended period of time, shows extraordinary support for community health centers, their patients, and their missions. He won many awards in his lifetime, including the Jaycee Man of the Year, American Legion Department South Carolina Legislator of the Year, and the South Carolina Downtown Development Association Special Service Award.

He was a member of First Baptist Church in Ware Shoals, past President of the Lion’s Club, past Commander of the American Legion, and a member of the Burton Center Foundation Board. Representative Carnell was truly a servant of the people.

See his fact page at scstatehouse.gov.

Senator John W. Drummond was a life-long servant of the people. He was a captain in the US Air Force, flying 47 missions in World War II, including close air support for troops invading Normandy on D-Day. He spent the last 10 months of the war as a POW in a German camp. Among his many World War II decorations are The Distinguished Flying Cross and two Purple Hearts.

After he returned to Greenwood, he started the Drummond Oil and the Greenwood Petroleum Companies.

He was so highly regard by colleagues on both sides of the aisle that when an incoming Republican majority cost him his two senior positions of authority, the two parties got together and created the position of President Pro Tempore Emeritus for him. He was also the chairman for two committees honoring veterans and a special international emissary on behalf of the state.

While he had no college degree, he was awarded numerous honorary degrees from universities across the state. Both Lander and Piedmont Technical College have facilities named after him. He was an active proponent of the environment, with two educational centers named after him.

He was a member and deacon of First Baptist Church of Ninety-Six, former President of the Lion’s Club, and Commander of the American Legion. Senator John W. Drummond lived a full life, devoting the entirety of his 96 years to serving his community and his country.

You can read more details of Senator Drummond’s life: